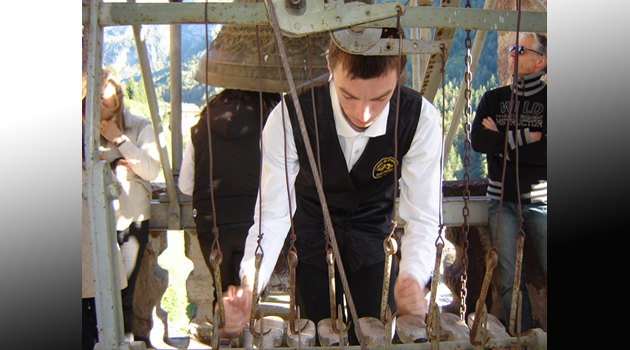 Teaching youngsters the art of bell control and change-ringing was and still is a defiant goal right from the start. Unlike Great Britain, until 1998 Bergamo bell ringers never experienced the idea of planning how to teach effectively tradition. This was because this art was always handed down through generations simply orally. When Bergamo ringing tradition got endangered by bell automation and radical social changes in modern society, there emerged the need to make young people approach the bell-ringing tradition. The point was how to attract them towards something which could sound as an outdated hobby, a sort of unfashionable return to the past.

Manual bell ringing system and visits to old abandoned bell towers surprised papers and media, commonly convinced that all Bergamo bells were automated and hardly no bell ringers existed any longer. The role played by modern technology resulted into a double face conclusion: on one hand it led to massive automation of bells; on the other, though, inventions such Internet helped teenagers both familiar with the PC world and the bells to communicate and produce a movement of reconversion back to the traditional ringing system. Two new elements proved fundamental for this: one, regarding the bell ringing tradition as a part of local heritage to be preserved and shared; two, use modern technology to communicate and involve new subjects into this fascinating world on the verge of extinction.

The first teaching project started in 2000 in Roncobello, a small village set in the heart of Alps, endowed with a good number or rings still manual and a lively group of boys keen to approach what had always been regarded up to that date just as a sort of game, that is bell ringing for Sunday Mass or on occasion of the local Patronal Festival of Mother Mary of the Holy Rosary. Several elements concurred to push through such innovative idea for the area: a good supportive team of parents and relatives, no complaints from local authorities or residents for prolonged bell practice, strong determination to share time and experience. The first step to take for a start was to find the fastest strategy for them to acquire a pretty acceptable control of bells, basic change-ringing, sense of responsibility for being part of a team whose work in progress would be visible to all the community in short time.

Unlike other musical instruments, we decided to start our project with no theoretical introduction to the ringing world. Although it could be criticizable, experience teaches us that most young people give up studying music just because they are expected to merge themselves not only into practicality but also – and above all in Italy – music reading and sol-fa syllables. To our surprise, it turned out that after two years a good number of boys who joined our school decided to take up more instruments, notable piano and organ, to complete their education.

With time passing we have realised that in many cases children and boys are first attracted by the bells because of their sound or because they just swing. Having the chance of taking a small child or even a baby into a ringing chamber, one will soon realise that they will be spellbound by the ropes going up and down and the sound of bells coming down from above. When grown up, the sense of responsibility enhances and the tendency of paying attention to the sound of the bell one in ringing becomes part of the attitude of a ringer.

Bergamo bell ringing tradition includes change ringing and carillon playing. The latter likely originated in Belgium in 1520 and then spread out in Holland and France with rings of up to 70 chime bells. In Bergamo no rings over 12 bells are recorded, prevailing rings of 5 and 8 bells. Despite the aforementioned countries, the carillon repertoire in our area was not produced by classical music composers but collected from oral music such as traditional dances and band marches. I say ‘was’ because no more music has been composed in the most recent years. Rather, the researchers’ interest has been mainly focussed on saving old ringers’ memories, writing down scores of what was recorded from them and trying to revive a living treasure among youngsters. No doubt that carillon ringing requires more music skills than change ringing since the ringers has got to deal with a sort of rudimental piano keyboard. In order to practise the tunes to be performed in the belfry on festival days, at the beginning of XIX century ringers devised a sort of folk xylophone – called ‘campanine’ – made of glass and brass bars or metal pipes. Through this instrument ringers managed to build up an extensive range of ‘sonatas’ still played nowadays. Its sound imitates the one the bells and became quite popular even in pub and inns, even played by beggars in markets to ask for charity. Along the years, our ‘campanine’ have become essential in training youngsters and encouraging group activities. Several groups of ‘campaninari’ (campanine players) have matured their own experience through this and still plays relevant role as a link between the ringing world and other folk and classical instruments (accordion, bagpipe, clarinet, flute, violin organ and more else). The novelty of our project and its cultural basis and support has called the attention of a new audience who attends our concerts that have been offering in the last ten years a more than respectable musical tradition.

Bells and bell ringing tradition have got out of a dark long tunnel marked by ignorance and neglect. They are starting to see a new light whose value will be worth preserving, studying and divulging.