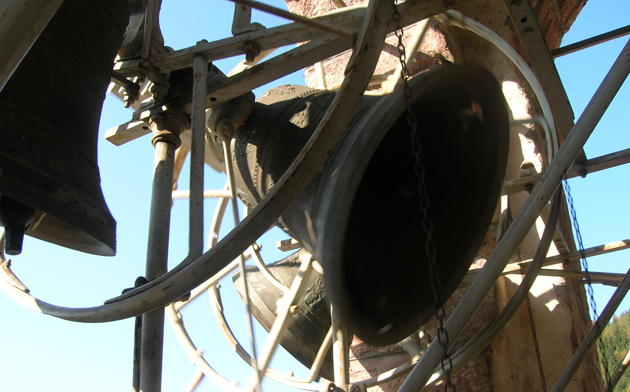 Bergamo ringing system, which is part of the so called ‘Ambrosian ringing system’, can be regarded as a sort of 270° circle system, so not totally full circle. In Bergamo bells can swing on both sides but can be raised just on one side. This means that when a ringer lowers a bell, it will swing through 270° and clap twice before getting back to its original position.

As a start, all ringers are expected to swing the bells through an even greater arc from upside down to upside down until they are fully raised from treble to tenor. Once all the bells are all up, the band will start a sequence of rounds from treble to tenor. Yet the basic difference between the English system and Bergamo system lies in the fact that the English ringers ring one bell at a time whereas the aim of Bergamo ringers is to make chords just like Veronese ringers.

The complete sequence of notes will be as follows:

The last two sounds won’t be matched by any other note or bell because they are the second stroke made by bells 7 and 8.

After ringing four or five rounds in order to get an effective control of every single bell (especially when ringing bells we’re not very familiar with), the band will start ringing changes, which are musically based rather than permutations.

The following video illustrates some features of Bergamo ringing system right from the belfry: