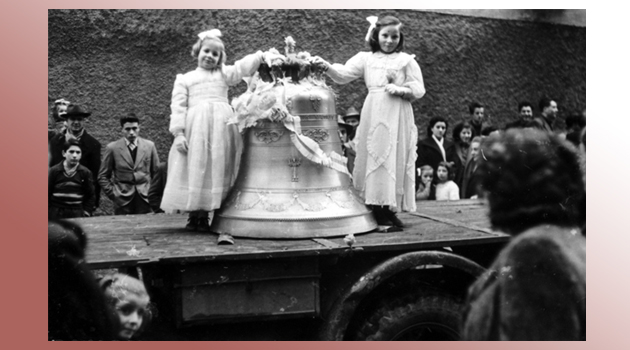 The current system of bell ringing in Bergamo dates back to mid 18th century. Before that, very few documents can prove the existence of a solid tradition. Possibly only two or three bells were hung in bigger churches until 1600 with a very rudimental ringing system only for swinging bells. Bell founders started to cast complete rings of five up to ten bells as we know them today only in 1750. Since then, bells have been intended not only as a mean to call parishioners to church but also as a proper musical instrument. Such a change was probably due to the cultural influence of French and Belgian merchants who would travel to Bergamo to trade textile products. In France and Belgium the first rudimental carillons date back to 1510, with a complete ring of 17 bells in Malines. Right from the start, carillon tunes in Bergamo have sounded different from the ones performed abroad because their sources were essentially popular and oral, with no written scores. Priests have never rejected the idea that popular tunes should be rung on the towers, the only religious tunes being few Marian songs and Christmas’ Carols. So far as today, carillon tunes have never been rung for non religious events. Between the 19th and the 20th century, each parish used to compete with the others to cast bigger and bigger rings of bells, even though their weight and size was not always matched by fair quality.

In 1942, during World War II, Benito Mussolini decided to take the biggest bells off the  towers and use its bronze to cast new weapons. Such a decision pushed many parishioners to rebellion, above all in the small villages of the countryside and in the mountains, where people had made huge efforts in the previous decades to collect money to cast bells. Many bells were taken off the towers by parishioners themselves overnight and hidden underground or in stables, covered by hay, before the arrival of the fascist soldiers who were supposed to remove definitely the bells. When the war ended, the new Transport Minister refunded the parishes affected by Mussolini’s decree to give financial support for casting new bells. Yet, the most serious damage for bell ringing tradition was the automation of bells. Ropes and keyboards were taken off by bell hangers and replaced by engines to swing the bells and by automatic hammers to perform carillon tunes. Poor quality automation and lack of control on hangers’ work caused enormous losses: first, many ringers were ‘pensioned off’ regardless their voluntary service of bell ringing; secondly, the art of peal ringing and carillon ringing began to fade away from old ringers’ memory because of lack of practice. Thanks to on-field based research carried out by folk music experts and due to official decrees specially made by the Diocese of Bergamo, a good part of this musical treasure has been saved and is being revived by new bands of young ringers along with a very strict control on bell restoration.