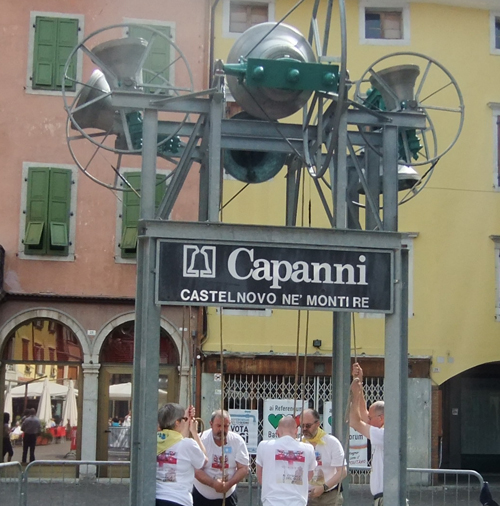 The weekend after the ANZAB Festival in New Zealand and two weekends after Central Council in England, I attended yet another meeting of bellringers, this time in Italy, in the small city of Cividale del Friuli in the Natisone Valley north of Trieste. The occasion was the 51st national convention of bellringers, representing different ‘systems’ of ringing from the regions of Italy. These included the Veronese system of ringing full circle with rope and wheel, and the Bolognese one, which is terrifying when viewed at close range in full scale as you live in constant expectation of the ringers falling among the bells and being turned into mincemeat, or being brained by the bell, the headstock or the clapper. Or the tower collapsing from the vibrations. These two systems I had seen before, also the Ambrosiano from Bergamo, but not the local Friulian system or the Reggio-Ligurian. There were also chimes and carillons from Austria and Slovenia, near neighbours up in this top corner of Italy. Twelve temporary rings, provided by Capanni (Italy’s answer to Whitechapel with a history stretching back to the sixteenth century) were erected in various piazzas around this lovely town and were rung long and loud. With the city’s permanent bells also resonating from their lofty eyries, the air was drenched in bell music for large periods of the weekend, the three notes of the Friulian system from several directions merged with the characteristic ‘pop goes the weasel’ of the Bolognese, the tuneful sequences of the Veronese and our own change ringing.

My goodness it was noisy. Open bells stood in public squares surrounded by high buildings, and as Cividale del Friuli is largely car-free the effect was heightened in its echoing little streets. When ringing, I was glad I had kept the free earplugs handed out on the flight over. No British or Antipodean local authority would have countenanced it for a moment, but here the city authorities had embraced it, with promotional banners strung across the streets, public space made available and even the local savings bank sponsoring the event. And the crowds in the squares, not telling us to shut up the deafening row, but listening and applauding. At one point a group of elderly persons were ushered by their carers to chairs specially set out near the ring we were performing on, to listen to the ringing, and judging by the expressions on their faces, they loved it.

I was there with five English ringers, none of us speaking more than a smattering of Italian, but gestures and inventions filled the gaps. We weren’t quite sure what to expect; the invitation to one of our number to bring a band had come through an Italian contact who had warned us that this was Italy, and not to expect much detailed information in advance, but that it would all fall into place on the day (and broadly, he was right). We had expected to pay a registration fee, but this was refused. We were told we were guests and were issued with blue tags entitling us to free food and wine and access to all areas. Also natty yellow bandanas bearing the logo of the local ringing association, the Scampanotadôrs Furlans (for those thinking that doesn’t look very Italian, the region has its own language) which were jolly useful for avoiding sunburn on the neck when ringing in blazing sunshine, not something we are very used to. The forecast incidentally was for thunderstorms but they gave us a miss, apart from one clap of thunder attending the end of one of our performances (a gesture of disapproval by Capitoline Jove? This city was founded by Julius Caesar after all). We obeyed the old injunction against ringing in spur or hat, so those of us who are trichologically challenged were grateful that our sessions were limited to ten minutes at a time.

The boldest of us had a try at the Friulian system, which involves three swinging bells (managed by a rope attached to a lever) with variations to avoid “three blind mice” syndrome, or a metronomically swinging tenor and varied manual chiming of the treble and second between its blows. Installations are right at the top of tall, slender towers with high, arched bell openings below low-pitched roofs, having something of a Byzantine flavour, though some towers that I saw in other towns in the region are capped with spires or onion domes, reflecting the mixture of cultures in this corner of Europe. Our rather bumbling efforts at swing-chiming were confined to one of the mobile rings in a piazza, though some did ascend the Cathedral tower on the Sunday morning to see the ringing on what was probably a 35 – 40 cwt three.

Apart from that we stuck to ringing methods on the two Veronese rings. Cividale del Friuli can never before have seen the ‘English system’. In between the precise and musical concerti performed by the Verona and Vicenza ringers, we gave demonstrations of change ringing, mainly Grandsire Doubles and Bob Minor, conducted by gesture and bellow as normal communication was impossible. Emboldened by our success we branched out with a daring finale of Stedman and an encore of Cividale Place, a simple twin-hunt Minor method composed for the occasion. We also demonstrated half-muffled ringing, a new concept for the Italians.

Veronese bells are heavily counterweighted and have no stays or sliders, and the ropes have no sallies (they think we are wusses, using sallies). The rope is quite tough on the hands after more than a few minutes, which is as long as the concerti take. Also, the bells are always up wrong and their shape and throw ensures that they revert that way – what that means is that if you allow the bell to go more than a fraction over the balance, the clapper will drop across to the right (i.e. the wrong) side and then correct itself to the wrong (i.e. the right) side on the way back, and double-clappering results. We were quite concerned that this might ruin our half-muffled ringing but fortunately we managed to cope reasonably well with only a couple of extra tings.

Most of our ringing was done on the larger of the two Veronese rings erected for the occasion. In the same square, we were fortunate to make a good choice of bar for retreating to between our rings, to seek shade and refreshment. The patron and patrona spoke excellent English and enthusiastically executed our requests for typically local food and drink, and we returned there for dinner on our final evening. Somewhat embarrassingly, they kept insisting that rounds of drinks were on the house and I am not at all convinced that we were charged the menu prices for the drinks and dishes that we were allowed to pay for. They seemed so genuinely happy to see us. When we left, we presented them with a commemorative Scampanotadôrs bottle of wine signed by us all, and rang handbells for them (but then they just gave us more free drinks). That’s Caffè Gustabe on Piazza Paolo Diacono (next to the excellent Gelateria whose wares were also sampled). Lovely people.

I had taken my light six handbells, and we brought these out a couple of times, the first time in the piazza in between sessions on the Veronese ring, much to the interest of the crowd observing the ringing. We also took them to the conference dinner, a simple but excellent meal in a large marquee. There must have been three or four hundred people present at this (and at the lunch on the following day). The entertainment included a uniformed marching band, and a group of minstrels described in the programme as ‘intrattenimento folcloristico’. The minstrels moved around the marquee performing at each table. For the English campanari they performed a slightly risqué song in Friulano, which the leader’s wife was prevailed upon to translate for us. In return, when their duties were done and they were tucking into the meal which was obviously part of their fee, we took the handbells over to them, thanked them for their music and rang a couple of courses of Grandsire Minor for them, which delighted them and made us the centre of a crowd of intrigued Italian ringers, many of whom had not seen handbell change-ringing before. It wasn’t on a par with the 24-in at the Ringing World centenary celebrations, but it might as well have been given the applause we received.

Stephen Pettman, who had organised the visit, had arranged a banner for us to display at our public performances, and group T-shirts. Most of the attending groups had such uniforms (the bright yellow of one of the Bolognese groups was quite startling – we were less exuberant in our black and white). Also, two ringers’ gotches had been specially commissioned from Suffolk potter Peta Whiting, and at the final lunch these were presented to the local association as a token of our appreciation for their hospitality. In return we received a bell-shaped wicker basket containing local produce, duly sampled before we went our separate ways at the close of a very enjoyable weekend.

The various Italian ringing systems tend to be quite sharply defined by diocese, and each is fiercely defensive of its own system. Nonetheless, there is recognition of a need for mutual support to address the risk that the different arts die out. Some of the systems seemed to be well represented by a mix of older and younger ringers, but not all. Some are particularly vulnerable to replacement by computer. There is a move for a national federation of the various ringing societies, which are at present only loosely associated, and this was one of the main topics for discussion at the Cividale ringing festival.

For those interested in Italian ringing, there are numerous videos available on the web – just try searching for campanari. Some of the techniques are definitely not ones to try at home. But this is part of their heritage just as change-ringing is part of ours, and worthy of wider knowledge.