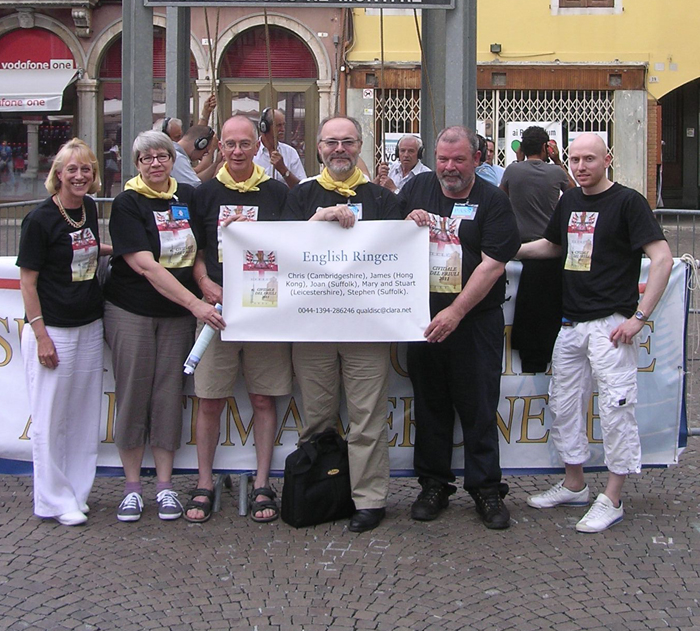 This is the first time that an English band has rung at this all Italy meeting. How and why was this? Over the last 22 years, I have regularly visited Italy, making some very good friends in the Verona, Bologna and Bergamo areas, believing that the three different systems used by these areas was the limit of manual full circle ringing in Italy. The Roncobello ringers, high in the mountains above Bergamo, are keen explorers of different ringing systems and have visited many places including Sardinia and England. It was their leader, Luca Fiocchi, that first mentioned all Italy meeting and made arrangements for me to attend last year in Arrone, Umbria. It was apparent that other Italian ringing systems used bells rung full circle but to a fairly limited extent – often just the tenor. The ringers of Reggio make a lot more use of full circle ringing, similar in style to the Bolognese but apparently not so complex – not too surprising as they are neighbours. Whilst at the meeting, my wife Liz was swamped by the Udine, Friuli ringers. They wanted to know whether we could get a team from England to demonstrate English ringing for the next meeting, which they were hosting. My thanks to the other five, who came with us to Cividale, not really knowing what would happen. James Smith has written an excellent resume of the weekend, appended below, with photos from the rest of us. As he mentions, one project is to form a body similar to the Central Council to ensure their traditions and history are maintained. Amazingly, some are quite envious of our organisation and these are people under 100 years old!! Perhaps we do get some things in Council right.