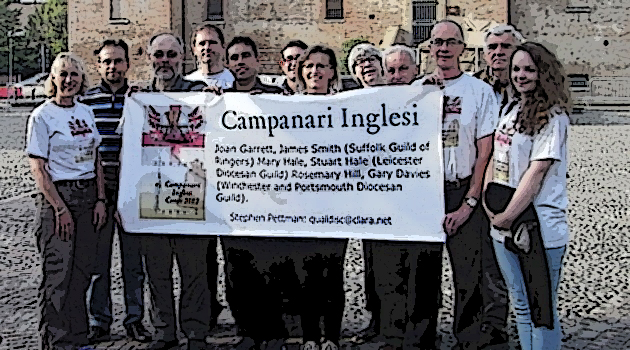 Once a year, ringers in Italy gather together to celebrate the many different styles of ringing that have evolved throughout the country. Last year a group of English ringers led by Stephen Pettman joined this celebration and acquitted themselves so well that we were invited back again for the 52nd Annual Raduno –this year to be held at Cento and hosted by the Unione Campanari Bolognesi. The earthquake that struck the region in May, just a few weeks before the original date for the Raduno, meant that the event had to be postponed, but in spite of the damage wrought by the tremors, on Sunday 30th September ringers from all overItaly (and England) joined their Bolognese friends for a memorable day celebrating our common passion.

Unfortunately the leader of many Italy trips and the man responsible for the close bonds of friendship that have been forged between the ‘campanariinglesi’ and their Italian counterparts – Stephen Pettman – could not join the band for this trip over, but nevertheless 6 ringers, 6 handbells, a large spool of rope, some t-shirts, a small bell specially cast and engraved at Whitechapel Bell Foundry and two large banners made their way over to the beautiful town of Cento on the Friday before the Raduno. Walking around the town centre, it was easy to see the scars of the earthquake, and a sobering reminder of the particular effect that the earthquake had had on local bellringing was given when the manager of the hotel told us that the sound of the bells had been greatly missed since the damage done to many towers rendered them unringable. Despite the fact that many of their bells are out of action (and will remain so for some time to come) the ringers of Cento have other means to practice their art, and that evening we were met by a team of Bolognese ringers and treated to a demonstration on their mobile ring. Kept in a garage a short distance outside the town centre, this 12cwt ring of five is a magnificent thing – far outstripping any English mini-ring in terms of its scale and presence, and watching this extraordinary technique was just as impressive as ever. After the demonstration we were treated to a memorable meal at a local restaurant, where the language barrier was easily surmounted by linguistic efforts from both sides, and generous helpings of a local speciality – foaming ‘black’ wine. The next day saw a leisurely start before the convoy made its way (more or less directly) to Bovolone, to be met by the local ringers for a mini-outing. We visited two sixes, where a lack of experience on the Veronese system was quickly overcome. Grandsire, Plain Bob and even Cento Bob Minor were managed, and the locals also gave us a quick ‘concerto’ before we had to hurry back to Cento for a look at the arrangements for Sunday and another wonderful meal, again washed down by the local ‘black’ wine.

Sunday dawned, thankfully free from any ominous rain clouds, and at 8.30 we wandered over to the Piazza Guercino for registration and a (second) breakfast in one of the nearby cafes. The day was begun by a few short speeches (which some of us understood some of) from the President of the ‘Unione Campanari Bolognesi’, and leaders of the Civil and Religious authorities. Fittingly, the first piece of ringing was from the bells of the Collegiata di San Biagio. Although structural damage means that it is no longer safe enough to ring these bells full circle, it was wonderful to hear them ‘a scampanio’ (chimed), and was the cue to begin a wonderful day of ringing diversity.

Scattered around the town centre of Cento were ‘castelli’ (mobile rings) from all overItaly, so that passers-by could enjoy the whole rich panorama of the various techniques and sounds of the country’s towers, all within about one square mile. The Veronese ringers were generous enough to allow us to use their mobile ring for a brief demonstration of the English ‘change ringing’ style, and although we found these bells rather more challenging than the two towers we had visited the day before, we still managed a good plain course of Grandsire Doubles (conducted through various hand signals and facial contortions). Having performed our piece we were able to join the locals of Cento in wandering around and appreciating all the wonderful displays of skill and passion that the ringers were putting on, before everyone gathered together for a communal lunch. Comprised of four courses and more excellent wine, this lunch was another valuable opportunity for everyone to get to know one another better, and for the Italian speakers in the English party to practice our skills (I personally felt more and more fluent after every glass of wine). The musical entertainment was begun by an accordion player on the other side of the room, and then somebody spotted our handbells. Silence was called for, and the three designated handbell ringers stood up in the eery silence and rang two (slightly nervous) courses of Plain Bob Minor. I can personally say that the unwise consumption of wine before the touch, and the appearance half way through the first course of Mirko and his microphone in the middle of the circle did not precisely aid concentration, but no-one seemed to notice the small hiccoughs, and the performance had an enthusiastic reception. The whole occasion was rounded off by the recitation of a poem in dialect (which none of us understood), and a series of speeches and presentations on behalf of all the associations represented at the Raduno. We gave a small bell, specially cast and engraved by Whitechapel Bell Foundry, and in his short speech James Smith expressed sympathy and solidarity with the plight of the Bolognese ringers after the earthquake. The party broke up after this, although ringing continued into the evening, and there was still plenty of time to meet new friends and soak up the fantastic atmosphere of the Raduno.

A massive thank you obviously goes to the Unione Campanari Bolognesi for organising such a wonderful event in spite of the huge difficulties facing their society, and their community as a whole in this difficult time. Their enthusiasm, and the passion of all the ringers that I met at the Raduno was infectious, and I was particularly touched by the warm welcome we received from everyone we met, and the generous hospitality we were shown wherever we went. Ringing in Italy with Italians was, as ever, a wonderful experience and we hope to return for another visit soon!