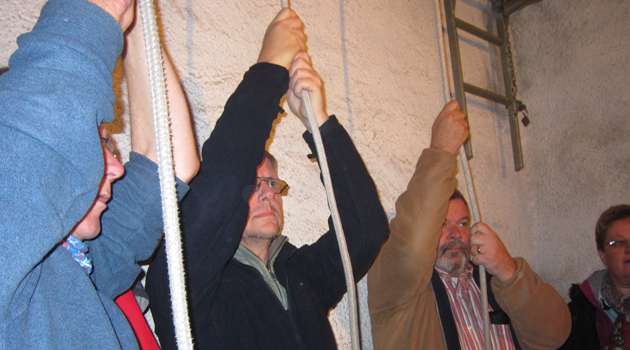 On Friday 28th October 2011, a band of ringers from Suffolk and other counties along with their relatives (43 in total) led by master ringer Stephen Pettman – one of four Suffolk representatives on the Central Council of Church Bell-ringers – visited Roncobello, a small village in the Italian Alps, on occasion of the fourth meeting with Scuola Campanaria di Roncobello, a local school for young bell-ringers. A good number of ringers went up the local tower of St.Peter’s and Paul’s church to visit the ring of eight bells (treble 1.3 tons) and tried to ring them according to the local system. Bergamo ringing system, which belongs to the so called ‘Ambrosian ringing system’, can be regarded as a sort of 270° circle system, so not totally full circle. Bergamo bells can swing on both sides but can be raised just on one side. This means that when a ringer lets the rope go, the bell swings through 270° and claps twice before getting back to its original position. The following video exemplifies how the English ringers managed to acquire a pretty sound control of Roncobello bells in just a few minutes. The main problem to solve for the English ringers was to prevent the instinctual gesture of pulling the rope down (as ringers do in England) instead of simply letting it go after raising the bell. Once done, the rest was a piece of cake thanks to their great experience and commitment.

In the evening Roncobello and English ringers gave a wonderful concert in St. Peter and Paul’s church, preceded by piper and taborer Stephen Cheek who led the audience inside it. The two bands performed a sequence of typical local tunes and change ringing, enriched by the presence of guest musicians. Scuola Campanaria di Roncobello opened the evening with Danza bergamasca (Dance bergamasque quoted by Shakespeare in his Midsummer Night’s Dream), O Little Town of Bethlehem and a XVIII century pastoral dance. Then it was the turn of the English ringers, who performed Grandfather’s Clock and Beethoven’s Ode to Joy on their hand-bells. Stephen Pettman and his ringers added Plain Bob Major on eight bells and Grandsire on ten bells.

Japanese soprano Noriko Habuki sang successfully W.A.Mozart ‘s Ave Verum Corpus, while organist Ann Little played John Bull’s King’s Hunting Jig and Jig Fugue by Danish composer Dietrich Buxtehude, then accompanying Scuola Campanaria in traditional Leffe Solemn March. Essex musician Stephen Cheek displayed his talent on his violin in a sequence of Morris and country dances, followed by organist John Perks’ Extemporization and Hail Mary of Lourdes. More Italian dances and religious hymns were on charge of Scuola Campanaria with Monferrina and again Hail Mary of Lourdes on their ‘campanine’. English hand-bells’ ringers closed the event by interpreting an evening hymn to St. Clements. Roncobello priest and mayor underlined the importance of this meeting at the end of the concert, that helped once more the experience of the young boys and girls living in the valleys of Lombardy to be known abroad. Scuola Campanaria gave the English guests a couple of baskets containing Italian delicacies and wine, ten CDs and a poster specially printed for the event. The English ringers brought local ringers lots of presents, books, leaflets, CDs sweets, jugs, pottery bells and hand-crafts. All this very much appreciated by Scuola Campanaria’s conductor Luca Fiocchi, who committed to visit England for a serious try on the English bells.

Stephen Pettman and his friends will be in Italy next year for the Italian National Bell-Ringers’ Meeting in Bologna. They are supposed to ring again some peals on Veronese mobile frames as they did last May in Cividale del Friuli and will surely improve their expertise on Ambrosian system bells through a quick tower-grabbing experience in Lombardy before heading for Bologna.

Thanks to Mr. Stephen Pettman and his comrades for their friendship, generosity and kindness, which no doubt will help to strengthen relationships across the English Channel.