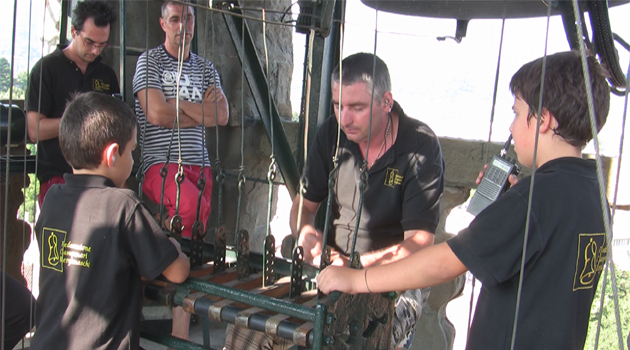 On Thursday 25th August the city of Bergamo will resound to an extended version of last year’s concert aimed at familiarizing local residents, Italian and foreign tourists with the bell-ringing traditions of our diocese. Confirming the partnership set up in 2010 to celebrate the feast of Saint Alexander Martyr, the civic authorities, the Diocese of Bergamo and the Bergamo Council of Church Bell Ringers are underlining the musical and historic value of bells in the city by means of a press conference which was held at Palazzo Frizzoni and with events at certain points of interest at which leaflets will be handed out to visitors. Like last year, from 10.30 to 12.15 the bells of seven city bell towers will ring out in concert to draw attention to the historic, artistic and religious significance of the city bells. The Diocese of Bergamo boasts an unusual number of bells to be found at parish and minor churches, shrines and religious institutions. The changes to be rung this year mean that the bell tower of the Convent of Santa Grata, home to an enclosed order of nuns, will be involved in the concert given by ringers gathered for the city celebrations.
The programme is as follows, commencing in the Upper Town (Città Alta) and continuing on downwards through the city via some of the most significant belfries before returning to the City Tower.
1. Torre Civica   Piazza Duomo   (Upper Town) 10:30-10:37
2. Cattedrale di S.Alessandro Piazza Duomo (Upper Town) 10:37-10:45
3. S. Maria Maggiore – Piazza Duomo (Upper Town) 10:45-10:55
4. S. Grata – Via Arena 24 (Upper Town) 10:55-11:10
5. S. Alessandro della Croce – Via Pignolo 85 (Borgo Pignolo) 11:10-11:30
6. S. Caterina – Via S.Caterina 10 (Borgo S.Caterina) 11:30-11:50
7. S. Alessandro in Colonna – Via S.Alessandro 50 (Borgo S.Alessandro) 11:50-12:00
Grand finale involving all the bells: 12.00 – 12.15. The end is marked by the tolling of the great bell of the Torre Civica: 12.15. Directions will be given directly from the City Tower, coordination point for all the different changes.
In the afternoon, visitors will have the opportunity of learning more about our tradition in the belfry of the church of Sant’Alessandro della Croce. Guided tours will be available from 15.30 to 18.00, with the ringing of the local carillon from 1600 to 17.00. You will be able to climb the tower, hear the sound of the keyboard operated carillon close to and find out how it is played.
At 21.00 in the evening there will be an open-air concert outside Palazzo Frizzoni, the City Hall, in the Lower Town (Città Bassa), where tunes from the folk heritage of the Valle Seriana and Valle Brembana areas of the province of Bergamo will be played on traditional hand-crafted instruments by ringers and pupils of the Bergamo Council of Church Bell Ringers. These instruments, similar to xylophones, have thin strips of glass or metal tubes instead of wooden blocks, and were used by learners to practice tunes for the church carillons before performing them in the belfries on feast days.
For further information, contact 333 / 68 68 875 or our web site luca.fiocchi@libero.it
Click here to see the poster which will be posted in the city of Bergamo.
Click below to see the two-page leaflet to be distributed to visitors to the churches taking part in the concert:
Page 1
Page 2