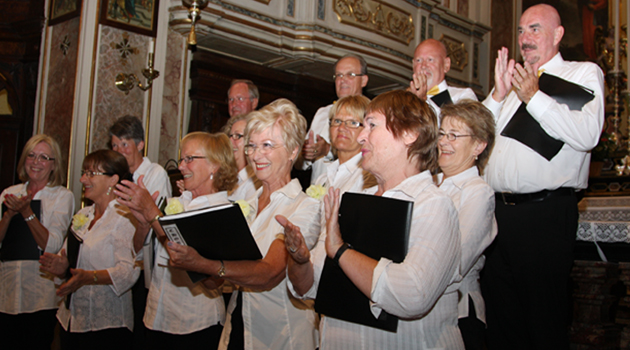 A weekend to remember: Chorale, a Spanish based chamber choir, enjoys the hospitality of the Scuola Campanaria di Roncobello, high in the Italian Alps.

The Scuola Campanaria di Roncobello (the Roncobello School of  Bell-ringing) hosted a successful meeting of singers and instrumentalists from different parts of Northern Europe late in July this year. The Chorale chamber choir, made up of 14 British, Dutch and Swedish nationals resident in the Pilar de la Horadada area of the province of Alicante, Spain, where they enjoy a well-deserved retirement in the sun, visited the charming village of Roncobello in the Italian alps, invited by their Italian counter-parts, both youthful and older, who make up the team of bell-ringers and off-shoot choir, composed of parents, relatives and friends of the young ringers. Chorale is the brain-child of Christine Eames, expert musician, composer and conductor, whose extensive repertoire ranges from the Renaissance madrigals of Byrd and Morley up to modern and contemporary works by composers such as Goodall, Taverner and Webber.

The host group Scuola Campanaria di Roncobello was founded in 2000 with the aim of preserving the bell-ringing tradition of the region of northern Lombardy. Over the years, the ringers and singers have rediscovered the traditional repertoire of local folk songs and tunes arranged for concert performance. This meeting of Chorale and the Scuola Campanaria in 2011 strengthened the ties of friendship established between the two groups when the Italians visited Pilar de la Horadada in October last year for a short stay, during which they found time to enjoy the beauties of the Spanish coast and to give a concert at the church in Pilar de la Horadada, attended by locals and British, Dutch and Scandinavian residents, some of whom sing in the Chorale chamber group.

In previous years the young Italians had already been on tour in East Anglia, where Suffolk bell-ringers offered them hospitality and they were able to admire local history and scenery, and the many bell-towers of the region which boast rings of up to 12 bells. Their next visit, in 2009, was to Sardinia, where they twinned with a folk group in Curcuris, an ancient village in the centre of the island, where they were welcomed by local ringers and dancers. Here they discovered the bare, rocky hills of the heart of Sardinia, the wonderful white sands of the breezy coastline and the Noragi archaeological heritage.

The exchange visits carried out by the two groups to Italy and Spain were coordinated by Helen Baines, a former teacher of English who spent forty years in Spain before retiring. Having discovered Baresi, part of Roncobello village, with her Italian husband Salvatore, she now resides there during the summer, and is proud to be a member of the Roncobello choir as well as of Chorale when she returns to Spain during the winter months. Scuola Campanaria was happy to arrange a series of shared concerts for their international visitors, the first taking place in the church of Baresi on 24th July, featuring both choirs, while the second was given in the nearby village of Trabuchello, when ringers took over from the Roncobello songsters.

Chorale’ s conductor, Christine Eames, gave a very interesting programme of religious and part songs, interspersed with solos from the Italian 17th and 18th century opera repertoire, sung by choir members. The Baresi concert commenced with Willam Byrd’ s round Non Nobis Domine , followed by Thomas Morley’ s Sweet nymph, come to thy lover, April is in my mistress’ face, Now is the month of Maying and The Silver Swan. The Roncobello choir performed Se Chanto, a traditional Occitane love song, Dolce sentire (taken from the well-known Italian film “Fratello sole, sorella luna” based on the life and conversion of Saint Francis of Assisi), and Dolce è la voce del cielo (the Italian version of the American Advent hymn Whispering Hope). Chorale then gave a series of solos from the repertoires of Haendel (Lascia ch’ io pianga and O lovely peace) , Caldara (Selve amiche) and Mozart (Voi che sapete). This was followed by two “a cappella” songs performed by the Roncobello choir: Come una rosa eterna, the Italian version of Praetorius’ s Est ist ein Ros’ entsprungen, and Signore delle cime, an emblematic song of the Alps associated with remembrance of soldiers who have passed away. They rounded off their appearance with the lively Christmas carol from Provence, Lei Pastoreu, before Chorale came on again with a selection of modern and contemporary religious songs (Anton Bruckner’ s Locus Iste, Sergei Rachmaninov’ s Ave Maria, Howard Goodall’ s The Lord is my Shepherd, John Taverner’ s Song for Athene and Andrew LLoyd Webber’ s Pie Jesu). The evening came to a conclusion with a rousing version of Handel’ s Hallelujah Chorus, with a quieter postscript in the shape of the Gregorian chant Magnificat interpreted by the Dutch soloist Wim van Hugten.

Many complimentary remarks were heard from members of the packed house, impressed by the complementary repertoires and interaction of the two choirs, where traditional and classical works and voices from many nations blended to great effect. Christine Eames demonstrated her expertise in the seemingly effortless management of her singers in a varied and difficult repertoire, giving a positive and friendly image of the choir, hardly surprising in acknowledgement of the immense kindness and generosity displayed by their Italian hosts.

The following night’ s concert took place in the charming 17th century church of Santa Margherita in Trabuchello, newly restored the previous year, and one of the few churches in the region which still boasts an organ which has still not been automated, being pumped by hand. Chorale members were fascinated not only by this, but by the sight of the young bell-ringers tolling the ring of five bells cast in the 1950s. The ringers set the concert off to a rousing start with seven tunes performed on their campanine (local folk xylophones made of glass brass and metal bars) and two solos given on a set of 10-bell Swiss keyboard which reproduces those commonly placed in bell chambers for playing carillon tunes, and which was powerfully thumped by two talented young men, Luca and Patrick. A night to remember. Later Chorale displayed its habitual repertoire anew with fresh solos such as Francesco Gasparini’ s Lasciar d’ amarti.

The end of each of the two concerts saw further hospitality in the shape of excellent refreshments provided by the good ladies of the villages whose support means such a lot to the Roncobello musicians. While enjoying home-made delights, Chorale members commented on the beauty and richness of all the local churches, amazed at the quantity of works of art to be found in each one, however small and out of the way, realizing how difficult it must be to fund the upkeep of buildings in communities with as few as 400 inhabitants. Foreign visitors feel that our churches are almost museums, and we ourselves are aware that our treasures need to be better cared for while knowing that the fact that Italy holds so many works of art which are a valuable resource for our country while having a limited budget to invest in such work makes it complicated to distribute funding to the best effect.

As we bade farewell to our visitors, plans were already going ahead for a further visit to Spain, a meeting point for arts and friendship for between people from the North of Europe residing there to appreciate the Mediterranean lifestyle and our group of young ringers and singers who have recently set out to bring our local traditions, one of the hidden musical treasures of northern Italy, to other areas of Europe.