A Night with English Bell Ringers in Roncobello 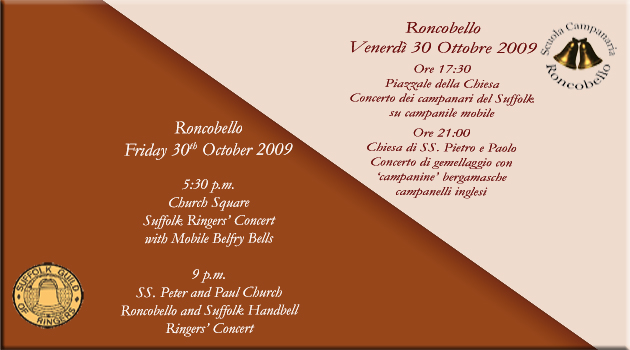 On 30 October 2009, about 50 English bell-ringers coming from London, Essex, Hampshire, Norfolk, Suffolk and other counties of Great Britain visited Roncobello (Bergamo-Italy) and met some representatives of the local Bell Ringer School (Scuola Campanaria di Roncobello). The planning of this meeting started last year and was aimed at strenghtening friendship, exchanging views and opinions about the bell-ringing tradition in Europe and planning common schemes for the future.

The meeting was indeed very productive, being a proof that it is possible to make music and friends even though two different languages are spoken and people come from different environments and walks of life. The idea that different peoples of Europe can meet and share common routes is becoming real and has managed to get to the remotest areas of our mountain valleys. This year Roncobello has welcomed bell-ringers and folk dancers from Sardinia and England, promoting twinnings not because of parental ties between some relatives living in Italy and others abroad, but because of the positive action of the media, notably Internet, which is able to get in contact people sharing common musical and cultural interests although living in different areas of Europe.

Roncobello-English Bell Ringers twinning was marked by two events. The first event was in the afternoon, when English bell-ringers were welcomed to the church and to the bell-tower, being shown the typical ringing system of Bergamo with some carillon tunes performed by Roncobello school pupils and later some change ringing.

The second event was after supper, with a handbell concert in St. Peter and Paul church at 9 pm. The night concert was preceeded by a charming ring on behalf of the English ringers on a very peculiar mobile belfry, called ‘mini ring’, with a complete ring of six small bells tuned to C major. In order to illustrate the Italian bell-ringers the most interesting features of the typical English ringing system, Stephen Pettman and his friends erected the mini ring during the afternoon and gave the audience a unique opportunity to see how English ringers celebrate holidays in their towns and villages. The peculiar English ringing system appears to be one of the most complete in Europe, deeply influenced – as it was for Baroque composer Johann Sebastian Bach in Germany – by mathematical patterns and probably indebted to the great school of scientists and mathematicians (i.e. Francis Bacon and John Locke) which developed in England and the rest of Europe during that age.

Roncobello and English handbell-ringers concert gave the audience the opportunity to compare two different hanbell-ringing systems which share many common aspects, though: firstly, possessing and using instruments that imitate the sound of real bells; secondly, using small bells as a mean to practice music generally perfomed on real bells; thirdly, having built a repertoire composed of tunes arranged to be rung on handbells; having managed to create an effective team-work so as to manage to ring the handbells as an orchestra.

The concert was opened by Scuola Campanaria with four Christmas tunes (La Bergamasca, Joy to the World, Piva and Pastorale di Leffe). Then followed a real exquisite show of English bell-ringers. A first group performed Grandfather’s Clock and Ode to Joy conducted by Richard Wilson. The second group composed of ringers coming from Essex and London performed two different pieces, the second one being notably ‘Grandsire’, one of the most ancient complete tunes for bells dating back to mid XVII century. Then the English ringers dedicated to Roncobello a tune specially composed for the occasion and called ‘Roncobello Place Minor’ on six bells.

Roncobello Place Minor was followed by a spectacular sequence of Christmas Carols performed by the Cardinal Ringers, a very experienced duet composed by James Hollins and his daughter Genna Mohammed. The audience was delighted at listening to Jingle Bells, Hard the Herald Angels Sing!, O Little Town of Bethlehem, O Come All Ye Faithful, Good King Wenceslas. It was really emotional hearing the audience joining the ringers to sing the last two songs. Christmastime was already in the air.

The concert was ended by Roncobello Ringers who performed four more tunes, including a foxtrot , a polka and two religious tunes (Solemn March and Your Sweetest Name), accompanied by organist Ann Little who played a recently restored Serassi organ dating back to the beginning of the XIX century.

At the end of the concert Roncobello and English Ringers exchanged gifts. Roncobello Ringers offered two baskets with Italian food delicacies whereas English Ringers brought a lovely fruit bowl and a jar engraved with a phrase: ‘Amicizia attraverso le campane’ (‘Friendship through Bells’). Roncobello Ringers also received several cds with good recordings of Grundisburgh bells (one of them even containing ‘Roncobello Place Minor’), calendars, books on Suffolk lanscapes and many other gifts we are going to keep in our school for display for visitors. We regard all there gestures as a very important message meaning the intention to create a very important network of musical plans and experiences in order to develop the interest for the bell-ringing tradition across Europe.

Italian journalist Diego Giuliani, who came from Rome just for the coverage of the event for German radio network WDR, praised the effort we have been making for many years to save and preserve the bell ringing tradition in England and Lombardy.

I would thank Stephen Pettman for his inexhaustible energy in planning trips with lively parties of bell-ringers. My gratitude is for all the bell ringers I had the chance to meet and talk to and share opinions about the future of bells, the problems of bell automation, old and new bells, good and bad bells. In short, we departed knowing that it will be pleasure to meet again and live new experiences together.

I am also grateful to Genna for flying from England to join our concert. Her effort to support her father James was heartly appreciated as well as we were deeply moved by the peculiar and fascinating sound of the handbells produced by all the ringers in our elegant church.

Our experience can be regarded as a milestone for planning future international events to keep alive and display the different aspects of the European bell-ringing tradition. A European convention of bell-ringers to take place in Spain or Sardinia next year or in two years’ time involving Bergamo, English, Sardinian and Spanish ringers will be possibly planned in the next few months. This new meeting would be an unprecedented way for us to meet ringers from different areas of Europe who share the idea of maintaining links to the historical musical treasures of their respective lands.