Some notes on our new CD “Giuoco di festa” 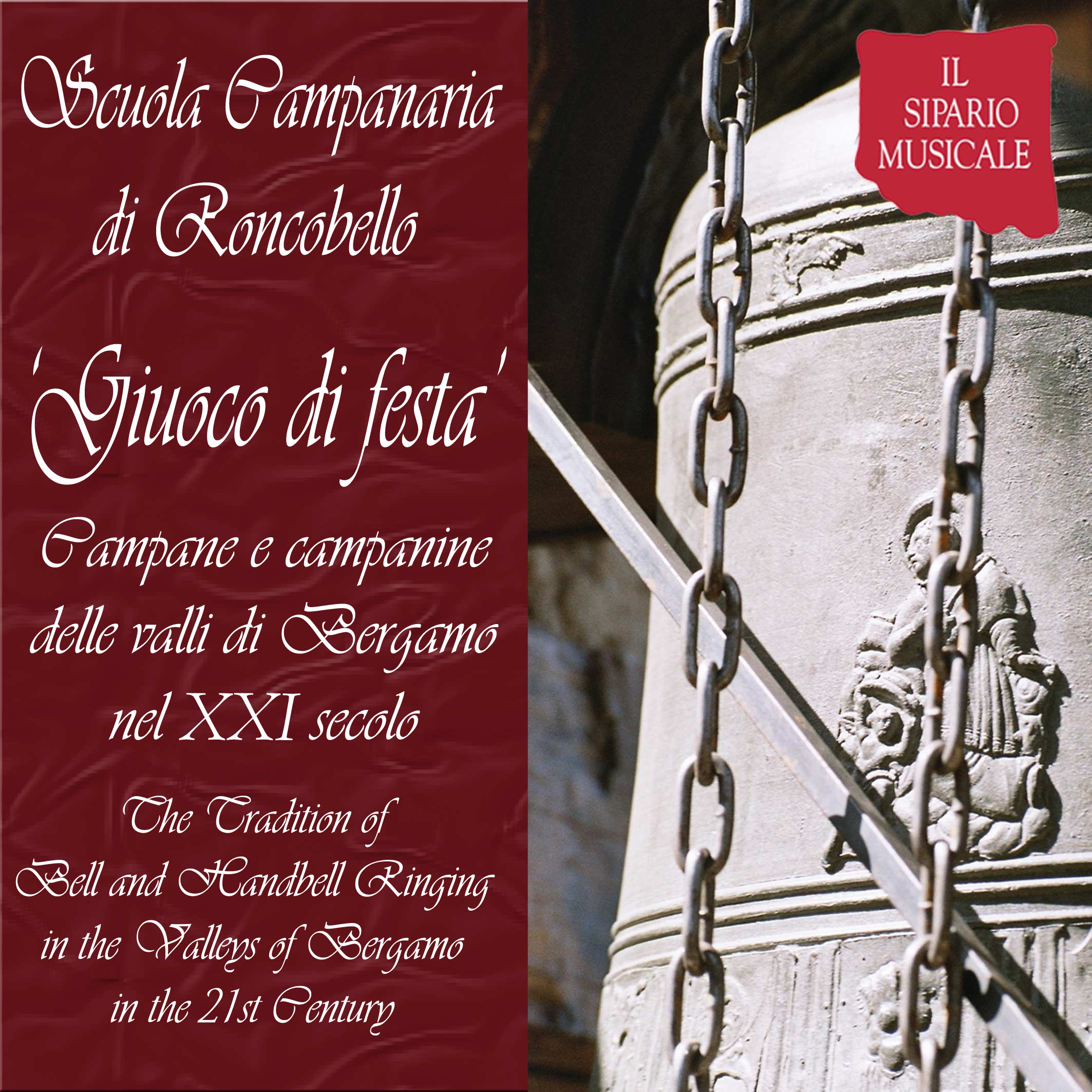 The Art of Bell-Ringing in Bergamo Valleys

The sound of bells has always impressed classical and opera composers. Pietro Mascagni opens his ‘Cavalleria Rusticana’ with the echo of two bells that celebrate Easter. Italian conductor Arturo Toscanini was very fond of the six bells of San Carlo Church in Milan, at a stone’s throw from Teatro alla Scala. Bargecchia bells were very familiar to Giacomo Puccini, who inserted their sound in ‘Tosca’. Finally, Antonio Vivaldi’s ‘Four Seasons’ include a typical five bell tune in the second movement of ‘Winter’, possibily inspired by some popular melody of his time. Bell ringing activity became very popular in Italy during the 19th century, just when people’s love for opera was spreading across the country and at all social levels. Notably, between 1750 and 1900 bell and handbell ringers produced a relevant repertoire in Bergamo valleys – a picturesque town at 50 kilometers north-east of Milan home to Gaetano Donizetti – producing an extensive series of ‘carillon’ tunes and sets of changes which differed as to stile from place to place.

The aim of this CD is to shed light on a musical treausure little known in Italy and abroad, which, nonetheless, is worth discovering and studying for its relationship with classical music. Tune ringing repertoire links the sacred and the profane. In fact, carillon tunes used to be and still are rung on the keyboards set in the belfry only on religious holidays, but the melodies played have been clearly forged in local inns, where ringers would meet to practise the tunes they had learnt from their forefathers. People used to sing Verdi’s and Donizetti’s arias even though they were not professional singers. In Bergamo, besides singing popular arias, folk musicians would perform ‘sonatas’ on their ‘campanine’, which were popular xylophones made of glass and metal bars whose sound is supposed to imitate music boxes. Between the 19th and the 20th century, campanine ringers composed more than five hundred sonatas derived from popular songs, marches, polkas, mazurkas, waltzes, as well as ancient dances such as scotish and monferrina. Campanine players were often joined by guitar and mandolin players, accordionists and bagpipers. Therefore, bell ringing (including both change ringing and carillon tunes) and Italian handbell ringing tunes on campanine have been collected in this CD with the aim of inviting our listeners to imagine what kind of music the Italian composers used to hear while strolling along the streets of their villages and towns or going to church for service or simply getting out for public meetings.

In 1750 Bergamo bell founders started to cast complete rings of five up to ten bells. Since then, bells have been intended not only as a mean to call parishioners to church but also as a proper musical instrument. Such a change was probably due to the cultural influence of French and Belgian merchants who would travel to Bergamo to trade textile products. In France and Belgium the first rudimental carillons date back to 1510, with a complete ring of 17 bells in Malines. Right from the start, carillon tunes in Bergamo have sounded different from the ones performed abroad because their sources were essentially popular and oral, with no written scores. Priests have never rejected the idea that popular tunes should be rung on the towers, the only religious tunes being few Marian songs and Christmas’ Carols. So far as today, carillon tunes have never been rung for non religious events. Between the 19th and the 20th century, each parish used to compete with the others to cast bigger and bigger rings of bells, even though their weight and size was not always matched by fair quality.

In 1942, during World War II, Benito Mussolini decided to take the biggest bells off the  towers and use its bronze to cast new weapons. Such a decision pushed many parishioners to rebellion, above all in the small villages of the countryside and in the mountains, where people had made huge efforts in the previous decades to collect money to cast bells. Many bells were taken off the towers by parishioners themselves overnight and hidden underground or in stables, covered by hay, before the arrival of the fascist soldiers who were supposed to remove definitely the bells. When the war ended, the new Transport Minister refunded the parishes affected by Mussolini’s decree to give financial support for casting new bells. Yet, the most serious damage for bell ringing tradition was the automation of bells. Ropes and keyboards were taken off by bell hangers and replaced by engines to swing the bells and by automatic hammers to perform carillon tunes. Poor quality automation and lack of control on hangers’ work caused enormous losses: first, many ringers were ‘pensioned off’ regardless their voluntary service of bell ringing; secondly, the art of peal ringing and carillon ringing began to fade away from old ringers’ memory because of lack of practice. Thanks to on-field based research carried out by folk music experts and due to official decrees specially made by the Diocese of Bergamo, a good part of this musical treasure has been saved and is being revived by new bands of young ringers along with a very strict control on bell restoration.

Scuola Campanaria di Roncobello (Roncobello Bell Ringing School) was founded in 2000 with the aim of preserving the traditional bell ringing style of Bergamo and providing youngsters with skills to ring bells and Italian handbells. Since its foundation, school teaching has proved so successful that it was decided to put up a band of young ringers to study the most interesting tunes recorded from old ringers and offer them to the audience in concert. Between 2000 and 2008 the group gave 150 concerts in the Italian churches, theatres and open spaces (squares, festivals, fairs). In 2001 Roncobello School joined the International Folk Festival of Suisio (Bergamo). In 2005 it rang for Fondo per l’Ambiente Italiano on the inauguration of a 17th century restored mill at Roncobello. In 2006 the band rang on the inaguration of the restored wooden bell frame of Lenna (Bergamo) and was invited by Bergamo Rotary Club for a Christmas Concert. On 14th September 2008 Roncobello School rang the bells of several church towers of Milan with Federazione Campanari Bergamaschi for MITO International Music Festival of Milan. On that occasion, 1500 people listened such an unusual concert from Duomo terraces. On 26th July 2008 Scuola Campanaria visited English Suffolk ringers and performed at Grundisburgh. So far four compact discs have been produced in cooperation with Federazione Campanari Bergamaschi, whose membership has proved essential for its development. Its repertoire spans from religious melodies to traditional tunes, all of which result from a careful analysis of our collected musical matter: interviews to old ringers, transcription and analysis of the different ringing styles of Bergamo valleys. All the repertoire is taught and learnt orally.